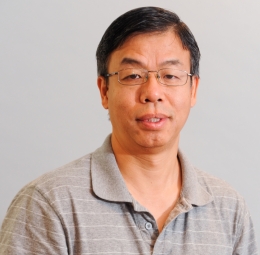 My research mainly concerns the quantum behavior of light with emphasis on multi-photon interference effects and quantum entanglement, quantum noise, precision measurement of phases, and interaction of photons with an collective ensemble of atoms for quantum state transfer. My recent emphasis is on quantum state transfer in frequency conversion via Raman process and parametric down-conversion process.

Fluctuations in electromagnetic fields exist even in vacuum due to the Heisenberg uncertainty principle. This noise is responsible for a number of quantum phenomena of light including spontaneous emission. However, quantum theory does not prevent us from suppressing this noise. Thus, there exists fundamental quantum noise in basically every measurement process. I am particularly interested in the quantum noise in phase measurement. It turns out that quantum noise leads to a fundamental limit, i.e., the Heisenberg limit, in the precision of phase measurement. The Heisenberg limit is the ultimate limit and is pretty hard to achieve. By far, only a few known quantum states can achieve this limit. There is another limit associated with phase measurement using classical sources. This is the so-called standard quantum limit, which can be surpassed with quantum sources such as squeezed state and number entangled state (NOON state).

A parametric down-conversion process is a nonlinear optical process, in which a higher energy photon is split via nonlinear interaction with media into two lower energy photons. This process is responsible for a number of novel quantum states, such as the two-photon state, the squeezed state, and EPR entangled state, etc. Raman process in a collective atomic medium is another interesting process that can lead to novel quantum systems. It entangles photons with atoms. Four-wave mixing in optical fiber is another process that is very similar to a parametric down-conversion process and may be used to produce quantum states in telecom wavelength. All the above mentions processes are used in our experimental study of quantum optics.