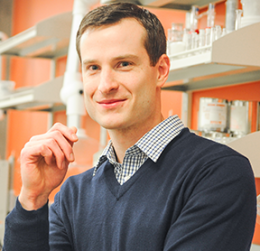 My research focuses on developing new ways of applying mass spectrometry to difficult problems. Mass spectrometry is useful in such diverse fields as biomedical research and clinical testing, forensic science, homeland security, and food safety because of its sensitivity, specificity, and generality. It is difficult to use, however, and typically requires extensive sample preparation prior to analysis. A number of so-called “ambient ionization” methods have been developed. These methods, which include DESI (desorption electrospray ionization) for the chemical analysis of surfaces and Paper Spray for rapid analysis of biological samples, allow for the direct analysis of complex samples without the laborious sample preparation process normally associated with mass spectrometry. The projects in my lab involve both early phase investigation into novel methods, and later phase R&D projects that seek to partner with industrial and government laboratories to translate research into impact.

Paper spray is a new mass spectrometry ionization method that allows for quantitative and qualitative analysis from complex samples without prior sample purification or chromatography. A small volume of biofluid such as blood or urine is deposited on paper, and a small volume of solvent is applied to the paper so that it flows through the sample by capillary action. As the solvent flows through the sample, the chemicals of interest are extracted into the solvent. After the solvent reaches the end of the paper, a high voltage is applied to the moist paper, and an electrospray is induced at the sharp tip of the paper. As the solvent evaporates, gas phase ions of the analyte molecules are generated and detected by a mass spectrometer. The entire analysis requires about 30 seconds and aside from an unmodified mass spectrometer requires nothing more than the paper substrate on which the sample is already stored, microliter amounts of solvent, and an electrical connection to the high voltage connection on the front of the mass spectrometer. Prototype instrumentation has been developed to automate this process (figure 1). Some applications of paper spray mass spectrometry developed by my group are described below.

Figure 1: Novel chemical instrumentation was developed to automate PaperSpray analysis on commercial mass spectrometers. A disposable cartridge with a blood sample being applied is shown in the lower right. This instrument is being commercialized by a company in Indianapolis.

There is a need to develop simple and fast methods to screen urine samples for pharmaceuticals, illicit drugs, and drug metabolites to assess patient compliance in methadone clinics and pain clinics. Analysis of dried urine spots by PaperSpray-MS is an intriguing technology for this application because 1) it requires no sample preparation 2) the entire urine analysis time is around 1 minute and 3) the use of dried urine spots could simplify sample transportation to the laboratory. Cartridges could be spotting with urine at the clinic and then mailed to the laboratory rather than shipping liquid urine. A typical mass spectrum from a urine sample collected at a methadone clinic is shown in Figure 2. Chemicals naturally present in the urine, including creatinine at m/z 114, were detected. Several peaks consistent with various drug and drug metabolites were found as well including methadone and the primary methadone metabolite 2-ethylidene-1,5-dimethyl-3,3-diphenylpyrrolidine (EDDP). 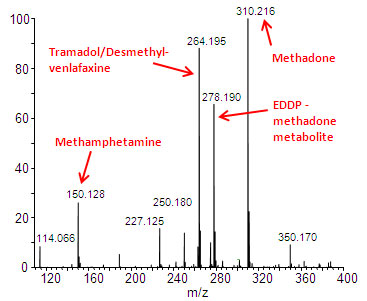 For many therapeutic drugs, measurement of the drug levels in the blood post-dose is known to be of significant value for improving patient outcomes and well-being. Therapeutic drug monitoring is rarely done, however, often because there are not methods available to measure the drug with adequate performance that can also be implemented in a clinical setting. We aim to simplify the process required for analysing drug levels in blood to make TDM more practical.

Tacrolimus is an immunosuppressive drug administered to patients who have received an organ transplant. Monitoring of tacrolimus levels in the blood are known to improve outcomes. PaperSpray MS was used to measure tacrolimus levels in patients and compared to a reference HPLC MS assay. The two methods gave comparable results (figure 3), but PaperSpray is simpler and faster.

In addition to rapid screening of drugs in urine, paper spray can also be used to quantitatively analyze illicit drug levels in blood. Methods are currently being developed to simultaneously measure panels of commonly abused drugs. Sample data for quantitative analysis of cocaine in blood is shown in figure 4. 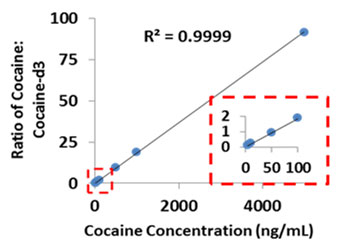 Mass spectrometry imaging is a method for the chemical analysis of surfaces in which the distribution of multiple analytes on a surface can be determined within a single experiment. The approach is typically done by scanning some type of ion-generating probe over a surface and collecting mass spectral data as the probe interrogates the surface. Provided the probe has a well-defined sampling area, the distribution of the chemicals detected by the mass spectrometer can be determined. 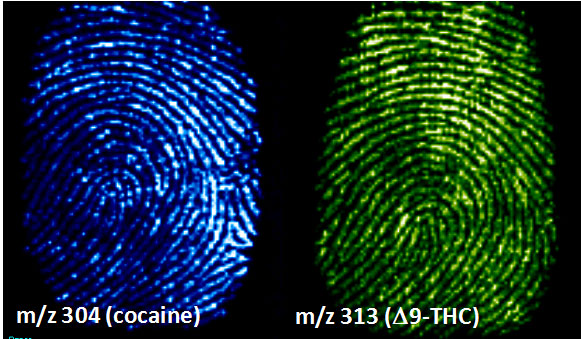 I am interested in the use of Desorption Electrospray Ionization (DESI), one method for performing mass spectrometry imaging. The distinguishing feature of this method is that sample analysis can be performed on untreated samples in the open air without any sample preparation. A number of compelling applications of this technology have been explored including differentiating between tumor and nontumor tissue and mapping the distribution of drug and drug metabolites within tissue samples for pharmaceutical research. My focus is primarily on the application of this technology to problems in the forensic sciences. One area of research is the imaging of latent fingerprints. DESI is capable of 1) mapping the latent fingerprints with sufficient spatial resolution to recognize the print and 2) identifying the chemical signatures present within the print, such as illicit drugs or explosives that the individual may have touched prior to leaving behind the latent print (figure 5). This information is valuable forensically because the spatial information (i.e. the fingerprint itself) and the chemical information (i.e. the presence of drugs, explosive residues, etc.) are linked together, providing strong evidence that the individual who left the fingerprint handled the material in question.