Drug treatment for hydrocephalus, or water on the brain, is the target of IUPUI research team

INDIANAPOLIS -- IUPUI biologist Bonnie Blazer-Yost is leading a team that seeks to create a drug that will be the gold standard of care in treating hydrocephalus, known more commonly as "water on the brain," a condition that can occur at any age for a variety of reasons. It may lead to developmental delay, neurological decline, blindness, impaired motor function, dementia or death.

"The goal of our research is to develop safe drugs that can be used as needed to address the root cause of the hydrocephalus," said Blazer-Yost, a professor of biology in the School of Science at IUPUI.

Hydrocephalus is a buildup of cerebrospinal fluid, which is essential to life. The body produces about a quart daily and reabsorbs that much to keep things in balance. An excess can be caused by overproduction, underabsorption or blockage.

Hydrocepahlus, or water on the brain, is caused by a buildup of cerebrospinal fluid. Photo by Getty Images

Blazer-Yost said the traditional standard of care is a shunt, or a small hole connected to a tube, that drains excess fluid to another area of the body. 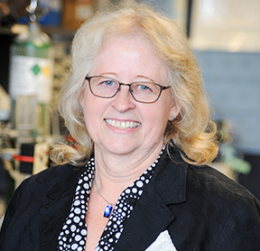 "But shunts can be affected by obstructions and infections," Blazer-Yost said. "Some estimates cite the failure rate of shunts in children at 50 percent within two years, and families and patients have told me that children can have more than 20 brain surgeries before they become adults. Currently, there are no effective drugs used to treat hydrocephalus long-term.

"The research team is conducting preclinical studies using a blocker of an electrolyte channel called TRPV4 in hydrocephalic rats and mice with promising results. Ideally, we would like a pharmaceutical company to license this work to continue the drug development."

Blazer-Yost disclosed the TRPV4 hydrocephalus therapeutic to the Indiana University Innovation and Commercialization Office. IU ICO filed for a patent on the intellectual property through the U.S. Patent and Trademark Office, which was issued in 2019.

The research has been funded by the U.S. Department of Defense, the Hydrocephalus Association, the Mayfield Education and Research Foundation, and Indiana University.